Omnipeek: Omnipeek User GuideDownload PDF
Configuring capture options
You can have multiple capture windows open simultaneously, capturing and displaying data in real time. The various capture options in the Omnipeek and Capture Engine Capture Options dialog let you configure each of these windows to have their own capture settings. 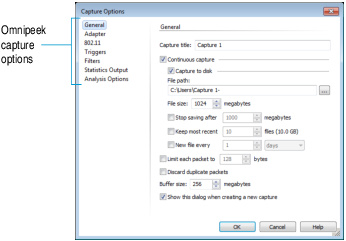 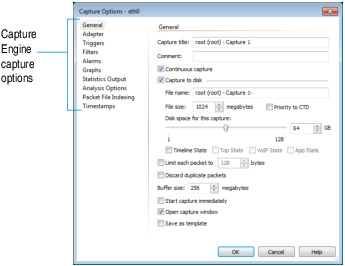 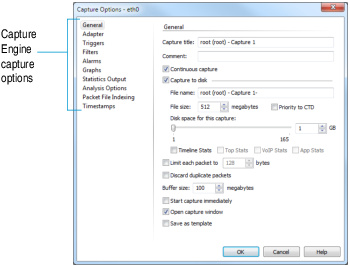 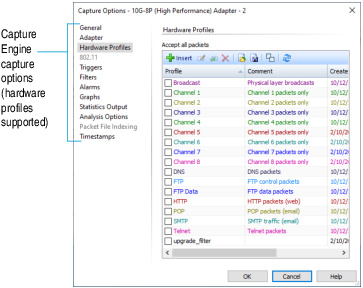 Analysis options let you view detailed analysis of your capture data in real time. Enabling analysis options will impact the performance of any capture, as indicated by the Capture Performance bar.
• Packet File Indexing (Capture Engine only): Packet file indexing options let you increase performance for forensic searches that use software filters by allowing you to specify the packet characteristics that you are most likely to use in a forensic search software filter.

Packet file indexing works best when the resulting packets from a forensic search using software filters are sparsely located within the packet files being searched. If the resulting packets exist throughout most of the packet files being searched, then the performance gains realized by packet file indexing are greatly minimized.
NOTE: NOT clauses and address clauses that include wildcard characters in the forensic search filter expression cannot improve forensic search performance using packet file indexing.
NOTE: The Capture to disk setting in the General capture options, must be enabled in order for the Packet File Indexing option to become available. If Capture to disk is disabled, then packet file indexing is also disabled and ignored.
• Timestamps (Capture Engine only): Timestamps options let you specify the smart tap manufacturer whose hardware timestamp formats are supported by Omnipeek and displayed in the capture. You can choose from the list of supported manufacturers, or you can select ‘Default.’ For example, if ‘Gigamon’ is selected, then Capture Engine and Omnipeek decodes the appended trailer timestamp added to the packet by the smart tap. The decoded timestamp replaces any existing Omnipeek timestamp and is displayed as the ‘Timestamp’ in the packet’s ‘Packet Info.’